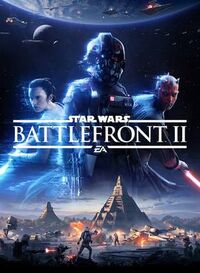 Battlefront 2 is the sequel to Battlefront. It was released on November 17, 2017. Currently little information is known about the game, however, the game is said to feature planets and characters drawn from the anthology and main film franchises including movie elements from the Star Wars spinoff "Rogue One: A Star Wars Story."

Battlefront 2 was released in two different editions and pre-ordering it included special bonuses:

The campaign for Battlefront 2 focuses on the Imperial perspective. It tells the story of an elite group of soldiers who serve the Empire known as the Inferno Squad. After witnessing the destruction of the second Death Star, Iden’s team embarks on an extraordinary odyssey of revenge, betrayal, and redemption spanning the 30 year gap between Star Wars: Return of the Jedi and Star Wars: The Force Awakens.

The multiplayer mode has been stated that it will involve up to 40 players in massive multiplayer fights in authentic locations across all eras.

Wage war in spectacular space battle scenarios. Weave between asteroids, fly across Imperial Dock Yards, and take down massive capital ships. Pilot renown craft like the Millennium Falcon or Luke Skywalker’s X-wing in exciting dogfights with up to 24 players.

Team up with a friend in two-player offline split-screen play.* Earn rewards, customize troopers and heroes, then take your skills and upgrades to the online battleground.

What we know so far